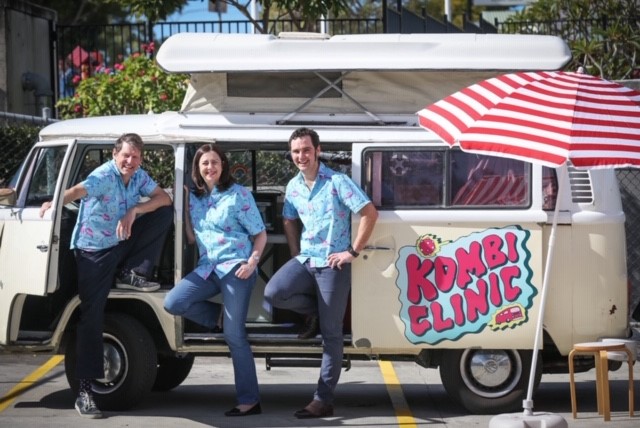 He was 6’4”, easily 130kg and agitated: “Get out of my way man, I’m going to my meeting!”. My medical colleague Matt and I had our backs to the wall and this fellow was not interested in our offer of a free liver test and $20 Woolies voucher.
“I’m going to NA. Do you know what that is?”
“Yeah mate,” Matt replied, “I know what Narcotics Anonymous is.”
The big man stepped closer. He was sweating. I could hear screeching music raging from his ear buds.

This was last Monday night at a hostel in West End. I had decided to join Matt in his outreach clinic – The Kombi Clinic – named after the ’75 VW his team drive to these disadvantaged places. The Kombi had broken down for the night and couldn’t go on. I was hoping that wasn’t an omen.

Hepatitis C affects over 200,000 Australians and it can lead to cirrhosis, liver cancer and death.

It is an unpleasant way to go. Previously Hep C treatments were arduous, riddled with side effects and were poorly effective. “And now with these new drugs we can cure up to 97% of cases!” Matt’s eyes lit up. “One tablet a day for 12 weeks and you could be cured? I’ve been waiting for this”.

An outlined goal by specialists and GPs alike is the potential eradication of Hep C within a generation. But there are obstacles. There are populations, such as those we visited at the hostel, who will never approach a hospital or doctor. There are challenges in the prison system.

Then there is also the stigma: “There is a population of people who may have run off the rails when they were younger,” Matt explained, “they may have dabbled in drugs or got some dodgy tats – but they got it back together. They now have jobs and families. They may not even think they could have been exposed to Hep C or maybe they don’t even want to know. But that is the tragedy: these people could go on to get liver cancer and it could be avoidable”.

At this point I was overcome by the true revelation of the night. Matty rattled off the various sub types of the Hep C virus, the intricacies of the new generation Direct Antiviral Agent medications and all the science. But it was his empathy that overwhelmed me.

We approached residents at their dining room and asked if they’d be interested in taking part. Then in modest confines, with no fanfare, offer them a chance to check their health and possibly save it. A friend of over 20 years, doctor, author, archeologist and the only person I know who could quote the four international cricket batsmen to score two triple centuries in test cricket (without Google) is also a humanitarian.

Genuine care for these people would end with a simple message:

“Remember there’s a few things we can do to try to tackle Hep C – eat right, sleep right, avoid putting rubbish into your body and if you’re going to get a tattoo, don’t do it in someone’s backyard or inject dodgy”.

Then after they had seen phlebotomist Mick for their blood test and Nurse Mim for a liver scan, he’d offer them free toiletry supplies and their Woolies or Coles voucher: “You probably don’t need the women’s pack,” Matt quipped to one fellow, “I wouldn’t imagine you require tampons”.
“Are you kidding?” the young man asked, “They’re the best thing for stab wounds – hold it on tight – no bleeding”. The education goes both ways.

I thought transiently about bleeding myself with the big angry gentleman at the beginning of this piece.

As he raised his voice, I turned slightly side-on with lead foot forward. I was ready. Matt, remarkably, opened up and stood full frontal, maintaining a calm tone.”It’s okay if you can’t make it tonight, but if you ever want to make sure you don’t have Hep C or want help treating it we can help you. We’ll be here.”

With that, the big man leaned in towards us: “Hey you’re on a mission – I’m on a mission too”. He stepped back and smiled: “I can’t do it tonight, but it’s good to give isn’t it?”

“It is,” agreed Matt. “And look even if you can’t come along tonight, let your mates know: we’re here to help out and we can make it better – you don’t have to have Hep C, we can cure it, you don’t have to live with Hep C”.

He turned and walked out into the night: to his NA meeting, maybe to tell his friends, hopefully to return.